I was surfing Facebook when I came across a link that had been shared numerous times. The title was a Rant and a Plea by Dr. Jennifer Rouse.

Dr. Rouse is a DVM in Pennsylvania, US.

The story was an unfortunate one about one of her Veterinary Assistants who had been attacked while out for a walk with her dog. There are a number of interesting bits to the story in that the dog that did the attacking was a Golden Retriever and the dog that defended its owner was a Pit Bull mix.

Dr. Rouse had some valid points in her rant, including that ANY breed can bite. She also pointed out that her friend had done the work and took the time to train her Pit Bull and build in a factor of reliability. That is to be congratulated. Training is something we need to promote over and over and over again. Training is what should have been done with the Golden Retriever in question.

But what Dr. Rouse went on to do is to assign blame about the Golden’s aggressive behavior to an invisible fence system the dog was supposedly contained by.

I think that is a big conclusion to jump to but Dr. Rouse isn’t alone in her opinion. I’ve seen plenty of folks jump on the “blame invisible fence” bandwagon. Electronic products are an easy scapegoat simply by essence of being “electric” and therefore scary in many peoples mind. Plus, assigning blame is pretty much the norm now-a-days. Too often people prefer to take refuge in castigating something rather than point the finger at the “someone” who is actually responsible.

Guns are responsible for violence.

Anybody else have a “hey wait a minute” moment when they read those 3 statements?

Good for you. That means you get it.

It, being that things aren’t responsible for outcomes. People are.

People need to take responsibility for their dogs. That means acknowledging if your dog has an aggression problem and dealing with it. It means recognizing that many, if not most, dogs can develop territorial issues if left unsupervised on what they come to believe is their turf.

If Dr. Rouse’s statement that “invisible fences are dangerous…” is correct then how do we explain all those millions of dogs on the invisible boundary systems around the world that have no aggression problems and have never attacked anybody?

Which means we then need to draw the same conclusion for those dogs that are contained by regular, solid structure fencing that have bolted the gate, or jumped the wall and tore someone up.

And it means we need to blame the chains for those dogs on tie-outs when they broke and the dog bolted and bit the kid riding his bike down the sidewalk.

Personally, I don’t agree with those types of conclusions. I think they are short sighted.
They tend to propagate from a sense of fear and outrage when we can’t easily come to grips with something that is as distressing as a dog attacking a human.

What would happen if we direct the finger of responsibility where it really needs to be pointed? To us, the humans.

What if we spent time teaching dog owners to step up?

How about this: If your dog is outside in the yard, be outside with him. Be engaged with him. Don’t expect him to lounge around in a yard for hours and then make wise decisions about passers-by without you there for guidance.

Yes, I know there are some dogs that are just fine being alone in the yard, but many, many are not.

Dogs came into our existence primarily because we humans liked and encouraged territorial and guarding behavior. In our primitive past it served as an early warning system and helped save our skin. That protective DNA that we began to selectively breed for hasn’t changed all that much.

Dog’s left unsupervised in the yard very often become dogs that go on guard duty. It is the human’s responsibility to train and manage their dog.

A containment system, regardless of what type, is an aid. It provides some measure of safety assurance that the dog isn’t in the street. It should not be a baby sitter and it is not responsible for your dog’s good or bad behavior. You are. 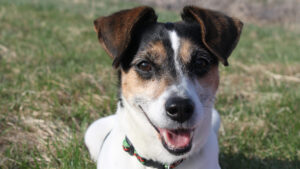 We sent our 5 month old GSP, Bauer, to Robin for her personal 3 week board and train. From the very start, her and her staff were responsive and extremely helpful. They replied to emails… Read more “Mary Kate with Bauer”

MaryKate Rosenfelder
Board and Train

I came out of the E/cademy week with Robin with a deeper understanding of remote collars and best practices for both using them and teaching clients to use them. It was also extremely helpful to… Read more “Nikki DeLuca”