Visit
I've been adding a bit of real food to the bowl of the girl in this photo for a couple days...IMO, she will be best...

It is time for my Halloween post.I had so much fun dressing up last year, I knew I’d find a way to pull out another alter ego this season.

With that in mind, I decided we’d discuss if the use of aversives are necessary when training a dog. I know it is a topic that causes much debate amongst trainers. It is kind of like politics with the topic getting heated and people tending to gravitate to one side or the other…

That is the question that I was mulling over on a recent drive to teach an advanced remote collar workshop in Indiana. It is probably more accurate to say I was stewing on that question because I just cannot seem to wrap my head around the entrenched philosophy that some trainers have. That all dog training can be successfully accomplished through 2 quadrants of learning theory. Those being +Reinforcement and -Punishment. What that means to you dog owners is: You give the dog something to reward (reinforce) when he does what you ask and you withhold those rewards if he does not do as you ask. So a cookie if you come to me, no cookie if you don’t. The purists among clicker trainers will tell you; “The cue is an opportunity for reinforcement for the dog. If the dog does not do the behavior then simply withhold the reward.” I’ve also heard it explained that their is a significant difference between a  cue, (which they use) and a command, (which others use – “others” being labeled as “force and intimidation” trainers).

The lingo applied is meant to paint pictures of “who” is the kinder, gentler trainer. What I take away from the discussion is: with a cue the dog is not required to follow through. As an example, if we are teaching a recall and the dog comes to me when called I reward him. If not, then I ignore his lack of response. The dog gets to choose if he wants to earn “an opportunity for reinforcement or not” No other consequence is applied at least via the belief of those who follow this training theory.

I guess my question to a trainer who was proposing this idea to me would be; if my dog doesn’t have to listen when I tell him/her something than what I am paying you to help me achieve and how long until I can expect some level of reliability in response in my typical daily routine with my dog?

In theory I  do get it. I get it from the stand point of working with animals in containment (marine mammals, zoos etc) which is where the techniques were heavily developed and refined. If there is so little other option (such is the case in a pool full of water and nothing else) It limits any real choice that the animal has in the matter. You get the toy/food through your cooperation OR you get solitary existence (no contact, no mental stimulation, etc) We simply ignore you and you will come around to our way of thinking because that is how you get to eat and gain any attention.

On a side note…Isn’t solitary confinement considered one of the higher levels of penalty in our judicial system?

This is the theory of ALL Positive training. Ignore what you do not want, reward what you do. And it does work. But, what it requires is extensive management of environment. Which again, is relatively easy with animals in captivity. I realize our dogs are “in captivity” so to speak. We own them and can control their access to things..but how tightly are you willing to monitor that? And do you truly want your dog to live a life of highly managed access to…well, to the world around them?

I know that I personally do not micro manage my dog that way. I want to live my interpretation of a “normal” life with my dogs. That means I want to leave them un-crated when I leave the house. I want to un-hook their leashes and let them turn and burn at the park, I want to have friends visit my house without expecting my friends to have to “ignore the dog, don’t look at the dog, don’t touch the dog”…in short I want to spend some time teaching my dog what my expectations are and then. Only then, AFTER a period of teaching….I actually want my dogs to have some responsibility in the matter. I want my dogs to make choices that ultimately allow them to be fully integrated in my life without my continual micro-management of them and the humans and other dogs around them. Giving the dogs an opportunity to make a real choice, IMO, means they are going to be exposed to consequences other than “I will ignore your lack of response.”

So back to my drive…..how did I get to all this spinning in my brain?

and how does it tie into dog training, aversives and the use of remote collars?

October 5th, 10 am…..I’m heading down Interstate 39 through Illinois, jamming to Foo Fighters when I glance at my odometer and see I’m pushing 90 mph. So I ease up on the accelerator, glance in my rear view hoping not to see those red flashing lights (again) and when the reading drops back to 75 mph I set my cruise control.

I’ve confessed to you before.

I LOVE to go fast. Once I grew beyond 5 foot tall I knew my dreams of being a jockey were over…but by then I’d learned about cars.

Maybe it was early imprinting, I’m 8 years younger than my brother so when he got his DL, I was just a tyke. He often was charged with watching his little sisters so that meant we got taken along on many of his excursions. (I’m sure he was thrilled) But for me…sitting in the passenger seat, flying the back roads of Wisconsin…I was grinning ear to ear. And when he turned 21 and started driving in the local stock car circuit…well that was a pre-teenage girls dream. Hanging with the cool boys!

I’m not ashamed to say I encouraged one of my early dates to bury the needle from the back of his motorcycle. Watching it tick past 120 mph was awesome!!

The down side is this deep urge comes with a price tag. A rather costly one and as years went on and insurance went higher….well, I’ve learned to monitor my behavior.

That is what I was thinking about on my drive down I39.

I asked myself: What if those red flashing lights were to pull me over frequently and often when I was observing the speed limit and they would reward my cooperation with $50.00 would that increase my desire to drive by the rules?

My immediate response was No Way.

If someone told me going the speed limit was an opportunity for $50.00 reinforcement but my speeding would be ignored I can tell you with absolute certainty I’d be in the left lane flying by you with a big ole’ grin on my face.

If they upped the positive motivation to $10,000.00 per good behavior. I suspect I would take them up on it for a while. At least until I earned enough for this baby.

But then, as Dog is my witness I AM putting the pedal to the metal. There simply would be a tipping point where the reward was not as powerful as my urge to go fast.

You see it is quite simple. Some undesirable behavior is never going to go away by ignoring it. The behavior itself is too reinforcing in and of itself. No amount of reinforcing an alternative behavior is going to stop my speeding. The only thing that has held me in check is having some consequence for my actions.

And those consequences DO NOT make me afraid to drive, nor do they make me dislike law enforcement. They simply have made me aware of monitoring my own behavior. They demonstrated to me real choice between the consequence of losing my license or being able to continue to drive.

This is what I came to on my journey. The idea that ALL positive works for everything, all situations….well, it’s a bunch of malarky. There is absolutely nothing in the natural world that works that way.

Please don’t misinterpret that I am diminishing the need for rewards and reinforcement in training…but the thinking that aversives aren’t needed is truly laughable. Those same people that argue this point will also try to convince you that head halters, front-clip harnesses and body wraps don’t work with aversive principles…somehow those are magically “all positive” too at least in the world of rainbows and unicorns!

I’m off for a drive…can you hear the AC/DC blaring?? 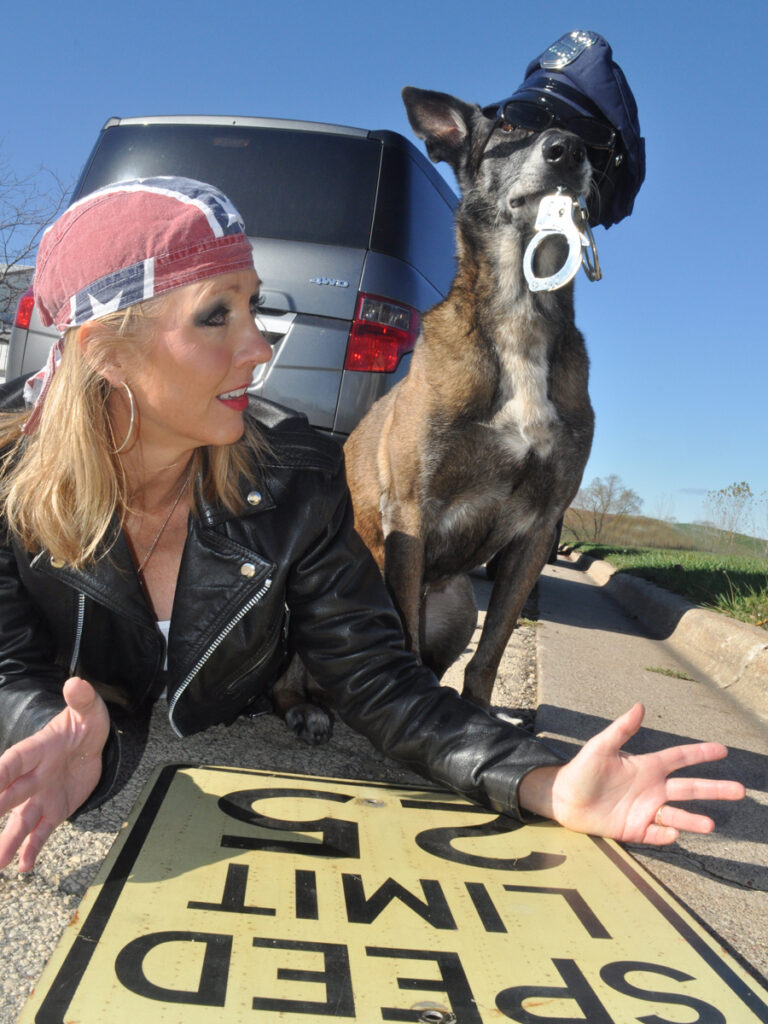