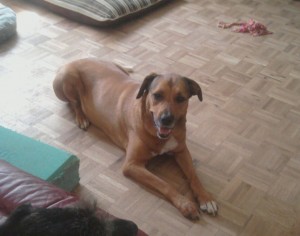 Meet Bear. Bear was the first dog that went through our adopt program. We routinely adopt dogs from a local shelter, train them and find them new, permanent homes.

When I first meet Bear, he had been in the shelter for a pretty long time and was losing his chance at finding a home. At the time, he was 115 pounds of pure muscle. It took myself, two leashes and another trainer to get him from his kennel run into my vehicle. He did not mean to be problematic. He was just SO strong and once he was out of his kennel he simple put his shoulders into it and WENT (and he took anyone attached to the leash with him!)

The overwhelming power of his pulling on leash and jumping on people made him a poor candidate for adoption. He was simple too much for people to consider taking him home.

We adopted Bear and began a remote collar training program. Within days he became very easy to walk and he could be trusted to run off leash but still come back when called. Bear stayed with us for a couple months until we found him a home with a student who came through the TMD E-cademy.

It has been 6 years and Bear is still doing fantastic.

While nay-sayers can tout that *shock collars* are harmful to dogs and cause undo stress…we know the truth, used properly they are a fantastic tool that create happy, well balanced dogs.

By providing this training option that works quickly and effectively for the average pet owner we are going to keep helping these dogs considered un-adoptable find permanent homes.