Visit
The trials and tribulations of teaching a puppy to settle.😅😆 Secondhand Soulmates is using my puppy training program to help their fosters raise a litter...

Since I recently wrote a piece about my vacation adventures and how it pertains to my dog training philosophies I thought it appropriate to also share some of the dog photos I took while there. I’ve been blessed to visit several countries and get a feel of the dog culture and I was not disappointed in what I experienced in St. Lucia

From what I saw there were a significant number of dogs who had “families”. Although not all were collared, leashed and “on property” as we are accustom to seeing here in the U.S. most of those I witnessed were visibly “with” their humans. They were at the beach or walking behind or lounging in the road but always near their master. I’ve visited other countries that had a far higher volume of strays and very ill looking dogs than I saw in St. Lucia, so this was a pleasant reality to discover. I also saw a fairly large veterinary hospital along our route on one of the excursions.

I observed the little guy in this next picture for about 30 minutes as his owner played his Sunday soccer game with friends. 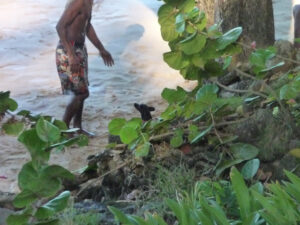 He and another small tan terrier of some sort were both tethered just below the veranda of my room. He would carry on with a significant ruckus each time the game got close to him. My take on his behavior was, it was excitement barking and wanting in on the action rather than territorial stuff. The bark had that certain “let me in” pitch.  After 20 minutes of it though, dad came over (which is when I caught the best glimpse and photo) and with a quick clap of the hands and a vocal equivalent to what I figure was “knock it off” he was quiet for much of the remainder of the game.

A bit later I saw him running off leash along with his cohorts playing in the waves. Seemed pretty happy and content.

This next guy was sunning himself in the middle of the road in front of the farmer’s house were we stopped on our tour to sample all of the various island fruits. 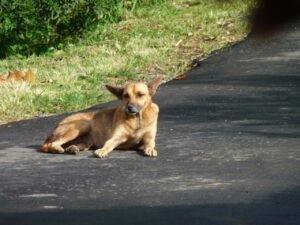 He never bothered to move or investigate as 10 of us drifted around “his place”. 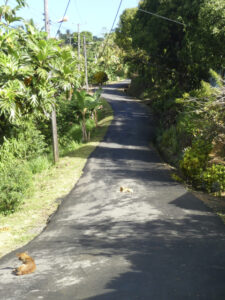 You could say he and two others a bit farther up the road could not have been less impressed with the visitors on their turf. Never got up, didn’t bark, not so much as a nod in our direction. It is the same reaction I’ve seen in many other countries where dogs are part of the culture but not given the same social status as here in the states. Dogs coexisting, no chaotic jumping, barking behavior with each visitor, no permanent existence in the juvenile state of development…

It certainly makes you contemplate our “intervention” as the root cause of most of the problems we see here at home. I am certain our often skewed perception that dogs are furry kids is the main problem…but I’m not going to wax on about it too much because I can guarantee someone will take my words out of context and tell me how cruel I am to not think these dogs are suffering a horrid fate by not being house pets…plus the reality is, that perception is pretty much what allows me to put bread on my table through profession training… and for this career I am truly grateful.